Grandpa Joe is almost always the first one to taste-test Muenster Milling Co.’s food at its facility in Muenster, 85 miles northwest of Dallas. At this point, with over 30 options, he exclusively eats his family’s array of pet food that’s been consumed by both dogs and humans.

It’s not a bad life for the mini goldendoodle, affectionately named after Muenster Milling’s founder, Joe Felderhoff. Grandpa Joe starts every morning running from desk to desk for treats in the office, which is stocked with freeze-dried beef meatballs, freeze-dried venison patties and ocean fish kibble.

Grandpa Joe’s owner, Mitch Felderhoff, and older brother Chad are the fourth generation to run the milling operation, which opened its doors in 1932. Muenster Milling has cycled through several rebrandings, transitioning from flour to livestock feed to locally sourced pet food.

Perhaps the company’s most important transition, however, came in August.

Muenster Milling’s family history is one of the company’s selling points. When Joe opened the mill, he bought grains from local family farms near the tiny town of Muenster and turned their wheat into flour.

The business was passed down to Arthur Felderhoff, who refocused the business on livestock feed when he realized making flour was more expensive than buying it in Kansas. Ronnie Felderhoff took over in 1974, growing the company to include show feeds and horse feeds.

In 1989, Ronnie saw an opportunity in the burgeoning pet food industry. He invested in a pet food extruder, and throughout the next decade, created an all-natural pet food line.

“If you’re in business for 90 years, you’re not doing what you originally started with,” Mitch said.

Chad and Mitch would come with their father to the mill growing up, helping with the late nights and early mornings of harvest season. They didn’t plan on coming back to the family business once they graduated from high school — Chad stayed in agriculture and worked for Conagra Brands, while Mitch was an athletic trainer at the University of North Texas.

Mitch returned to Muenster Milling to head the sales and marketing department in 2007, and Chad came back in 2013. They bought the company from their parents two years later.

The brothers have made a name for themselves at the company, expanding product offerings to include things like freeze-dried meat treats. The company makes both branded foods and private labels for customers across the country. 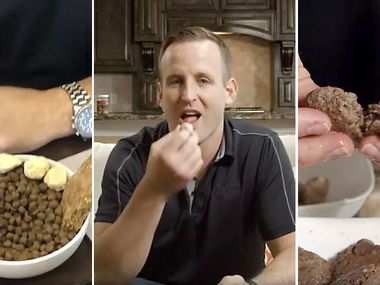 Last year, Mitch raised Muenster Milling’s profile by eating only dog food for a month straight and documenting the diet in January 2020. He lost 30 pounds in the process.

Human interest is a large part of the Muenster Milling treat-creation process. The brothers pay attention to diet trends, like the popular Keto diet, and customers can create personalized food for their pets with add-ins like salmon oil.

“The biggest factor is finding what people like and transitioning it to dog food,” Mitch said.

The decision to sell was not one the brothers took lightly. The company excelled during the COVID-19 pandemic, raking in about $22 million in revenue in 2020, Mitch said, spurred by a surge in online pet food orders. He expects to bring in nearly $40 million this year.

That’s only a fraction of the billions spent at pet care chains nationally. Mars Petcare, which owns brands like Pedigree and Royal Canin, saw over $18 billion in revenue in 2019, according to Statista. The next-largest company, Nestle Purina PetCare Co., brought in nearly $14 billion.

Pet food and treat sales increased 9.7% to a total of $42 billion in 2020, according to the American Pet Products Association. The pet care industry reached a record of more than $100 billion in sales.

Mitch and Chad increased their loans to keep up with the influx of customers. Eventually, they maxed out what their bank could offer at $10 million.

Bringing in a private equity firm gave them the flexibility to expand operations and pay off the debt the brothers had taken on. They broke the news to their parents while eating lunch at Schlotzsky’s.

“We told them that, for the first time, the Felderhoff family would not be in debt to animal food,” Mitch said.

Introduced through industry partners, the Felderhoffs found a promising partner in Kainos, which specializes in food and consumer businesses and has invested over $3 billion of equity in the sector.

“The Kainos team has been investing behind these themes for many years, and we plan to leverage the Kainos operations team to expand and further professionalize Muenster’s manufacturing capabilities,” Andrew Rosen said.

Growth is something Chad and Mitch are comfortable with. When they took over the business, the company had around 30 employees, a number that has since doubled.

Muenster Milling operates three facilities in Muenster and one in nearby Gainesville. To keep up with the dog food’s popularity, those facilities are going to have to expand.

The brothers’ roles in the company won’t change, they said. Chad will continue to head operations, while Mitch will continue leading sales and marketing. Their weekly Facebook Live show where they try new batches of their products will continue. Grandpa Joe will still serve as head taste-tester.

Muenster Milling is looking ahead with new product lines in the works. And Mitch is already planning another month of eating only dog food to show customers that the first run-through wasn’t just a one-time marketing ploy.