When you walk by the nondescript tan building at 1336 Grove St., there’s not much reason to stop. San Francisco is full of architectural gems and this facade is pretty simple. There are no brightly painted colors, no Victorian flourishes, no splashy sign — just a small logo pasted on the glass front doors for a contracting company. But tilt your head back and glimpse the very top of the center of the building and you’ll see an ornamental horse head poking out.

This emblem is a nod to what this ordinary commercial building once was — a livery stable, one of many former horse stables that are hidden in plain sight in the city. These buildings were an important fixture of any San Francisco neighborhood in the late 1800s and early 1900s. In the pre-car era, residents that wanted a private way to get around but didn’t have room to house their horses at home kept horses in communal stables called liveries that were centralized in neighborhoods.

For those that couldn’t afford their own horses, these historic liveries held horses, drivers and wagons for hire. These early versions of a taxi company thrived in San Francisco during the Gold Rush and according to Bonnie Spindler, they had the best industry in the country, even ahead of New York City. Spindler, a real estate agent and Victorian expert, said it might have been because the city still held farms and grasslands to grow such a thriving business, but business in general was booming at that time.

A San Francisco Chronicle article from 1876 states that the first livery stable opened in the city in 1851. The second was started just a few years later and sat on the south side of California at Montgomery in what is today’s Financial District. Before long, “the supply was equal to the demand throughout the city, and livery stables sprung up like morning mushrooms, till at the present time we have at least three-quarters of a hundred,” the article reads.

That reporter goes on to describe other stables such as the Dexter Stables on Bush Street near Sansome, which held 90 horses and 15 coaches. At 332 Bush St., Healy and Fagen’s livery, established in 1862, held 68 horses. At 408 Bush St., Mr. Martin’s stable contained 88 horses. Another sat on Sutter Street above Kearny Street. Another was at 126 Ellis St., which reportedly charged its boarding customers $30 per month, or about $739 in today’s dollars.

The Chronicle reporter goes on to describe a particularly well-known livery called The Fashion Stables on Sutter Street near Sansome, where the owner declined to disclose his income and expenses because “we might have to pay too much taxes if we told the amount of our full income, was the reply, accompanied with a knowing smile.”

For the most wealthy in society, they might have had a private carriage house built away from their property. That’s what was reportedly the case at 2126 Folsom St., currently the site of Stable Cafe and the architecture office of Malcolm Davis Architecture in the Mission. The clue is a wooden beam that sticks out of the top of the building — workers would have used a pulley system to hoist hay up to the loft while the horses were stored below.

Davis, who has owned the building since 2006, purchased it from owners who had cared for it since the 1970s. They passed along stories about how the building was formerly the private carriage house of James Phelan, the mayor of San Francisco from 1897 to 1902. While city records before the 1906 fire and earthquake are near-impossible to track down and verify, Davis was told the building was built in the 1870s and narrowly escaped the fire.

When he saw the unique building for sale, Davis couldn’t help but fulfill his dream of making the hay loft into an office, which he thought would be the perfect place for his architecture firm. “I loved the exposed timber framing, the plank floors, the tall ceilings. It’s just got a lot of character,” he said.

He later built out the lower level space to include a commercial kitchen, which now houses the cafe, and the adjacent parking lot is used as an event space. He said cafe visitors and event guests ask about the history of the space all the time.

The tall ceilings and wide open spaces of a horse stable lend themselves well to building conversion, and a feature story from Curbed in April 2018 shows the transformation of an old horse stable to a modern office building. The Jackson Square building at 915 Battery St. was reportedly “constructed from lumber salvaged from the ships that clogged the bay when the enterprising 49ers rushed into the city,” and while no one is sure when it was built, its original use was as a horse stable. It’s since served as an antiques store, an architecture office, and today, it’s home to the investment bank Scenic Advisement.

“The team worked really well together, and we were all in agreement that we wanted to leave the original purity of the building intact,” interior designer Tineke Triggs, principal at Artistic Designs for Living, told Curbed in 2018 about the conversion. “We left most of the original details in place — including what appears to be horse bites in some of the beams.”

There are also former horse stables adjacent to older homes on larger lots, often called carriage houses, like this one we featured in a Guess the Rent in June 2021. Some crafty homeowner along the way decided to turn this space into a loft apartment instead of a garage, but kept the stable-style doors. According to historical research from the San Francisco Planning Department, “Many of these buildings have since been destroyed, but some are still in existence and used as garages, accessory dwelling units, or small apartments. In some cases, the original house may have been demolished and replaced, and a carriage house or other ancillary building remains in the rear yard of the residence subsequently built on the parcel.”

The document also mentions that former livery stables were especially susceptible to redevelopment and many were replaced with apartment buildings or commercial buildings, particularly along Franklin and Gough streets.

220 Dolores St. has that telltale sign — a wooden beam that likely once assisted in lifting hay bales to a second level — attached to its carriage house, which can be seen from Alert Alley. One of the “Tanforan Cottages,” the home was built around 1853 and is one of the oldest residential structures in the Mission and is listed on the California Register and the National Register of Historic Places.

But most former horse stables and carriage houses aren’t protected and they’re not that obvious. San Francisco is a city of many old structures, so next time you’re gazing up at an old building, look for the clues.

Fri Sep 3 , 2021
Jessica Harrington has been fined €2,000 by the Irish Horseracing Regulatory Board for running the wrong horse in a 2-year-old maiden at the Galway festival in July. The mix-up emerged after Harrington ‘won’ the race with experienced 3-year-old handicapper Aurora Princess  rather than her intended runner Alizarine, who had been […] 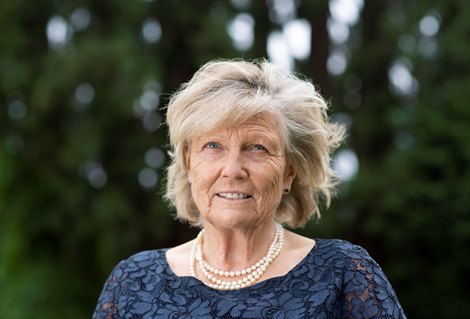