Cynthia Branigan was a Beatles-crazy girl from Lawrenceville, N.J., when she watched a horse dive 40 feet into a pool on the ocean end of Atlantic City’s Steel Pier. It was the first and only time she witnessed the famous spectacle, but its impact would endure.

“Without warning, he kicked off from the platform and soared through the humid night air with precision and dignity,” Branigan writes in a memoir, The Last Diving Horse in America, which will be published this month by Pantheon.

“The dive took but a few seconds, … the searing image of the horse’s body, pointing like a perfect arrow at his target below, seemed to run in slow-motion.”

The renowned Boardwalk attraction that so impressed the 11-year-old Branigan in August of 1964 shut down for good in 1978 as tastes changed, animal-rights activists complained, and Atlantic City embraced gambling casinos as its Next Big Thing.

Two years later, on behalf of The Fund for Animals, Branigan bid $2,600 for the retired diving horse named Gamal at a Burlington County auction.

It was the start of a relationship that would enrich both of their lives and set the course for her successes as a writer and animal-welfare advocate.

Branigan grew up in suburban comfort — her mother was a Clothier, as in the venerable Philadelphia department store — but had long felt like an outsider. She was well acquainted with cats but knew next to nothing about horses.

Nevertheless, she was eager to learn.

“Partly by choice, I was always on the outside [with people]. But that wasn’t true with animals. They drew me in,” Branigan, 68, said during an interview at the Bucks County home she shares with her husband, chemical engineer Charles Rissel, and their sleek assortment of greyhounds. Branigan rescued her first racing dog, named King, in 1987; her nonprofit, Make Peace with Animals (mpwa.org), has since found homes for 5,500 greyhounds.

The author of the well-received Adopting the Racing Greyhound and The Reign of the Greyhound, Branigan began working on the manuscript that became The Last Diving Horse in America a decade ago. “I had been profoundly affected by Gamal, but you have to be of a certain age to look back and reflect,” she said. “From time to time I would mention to other people what I’d done, and I’d see their eyes get wide. It occurred to me that maybe I haven’t lived the way everybody lives.”

Indeed: A self-described “preppy hippie” (”I had hair down to my waist but I didn’t want to wallow in the mud at Woodstock”), Branigan attended Franconia College, the experimental liberal arts school in New Hampshire that thrived in the ‘60s but abruptly closed in 1978. She was freelancing occasional stories to local newspapers when she struck up a conversation with the writer and animal-rights advocate Cleveland Amory after a Philadelphia lecture he gave in 1974.

Branigan became a volunteer at the Fund and three years later, the first-ever paid staff member of the organization, which rescued animals large and small across the country. Amory, who died in 1998, was widely known as a TV Guide columnist but also was a major force in the postwar American animal-welfare movement; a sanctuary he helped establish in Texas bears his name and continues to provide a home to hundreds of exotic and ordinary creatures.

During her 14 years with the Fund, Branigan helped set up adoption centers nationwide for 10,000 burros the organization rescued in the West. She befriended other horses, a burro called Sparkplug, and Hot Britches, a llama. But even her relationship with King, the greyhound who inspired her continuing efforts to rescue retired racers, could not eclipse what transpired between Branigan and the former diving horse she came to call her teacher and best friend.

Branigan researched his lineage and concluded that he was “a quarter horse mix, a popular blend for diving horses [because] it produced sturdy, compact” working animals well suited for the rigors of their unusual job. She includes in the book some history not only of the Steel Pier diving steeds, but other large animal acts that involved aquatics, such as the “plunging horses” featured at New York’s enormous Hippodrome Theater in 1905. Sketches of some of the best-known figures in the diving horse scene, such as “Doc” and Lorena Carver, also enliven her narrative.

Branigan is matter-of-fact when she writes about her grief after the death of her beloved grandfather, the emotional distance of her parents, and feeling adrift when they abruptly decided to send her to boarding school. As a child, she confided had in her cat, Cosmo; as a young adult, she discovered in Gamal a new, even more patient listener — and a willingness to listen in return.

“At first, Gamal was very guarded,” she said. “He was a tough guy, maybe a little like a carnival worker.

“He did test me. He ignored me, he wouldn’t come to me, he tried to run me down, … but he was buddied up with me, and what happened was beyond anything either of us could have imagined. I hadn’t been around an animal his size before, and soon I had this big animal leaning on me literally and figuratively.”

Branigan was not an experienced rider, so their relationship “was not astride, but side by side,” the author writes. Gamal boarded in different locations over the nine years she took care of him — she didn’t own a barn, let alone a farm. But there was plenty of grooming and carrot-feeding time even as The Fund for Animals job often took her on the road.

“He knew, no matter where he was, that I was his person,” she said.

When Gamal‘s manner of breathing shifted in her company in what seemed to her a calm and intentional manner, she would breathe with him and likens it to a shared meditation.

“Sometimes I experienced sheer bliss that I could feel this close to anyone,” Branigan writes. “I would tap into a consciousness that transcended the concerns of everyday life and revealed the unity and perfection of things just as they are.”

The author is well aware that even some horse lovers might find her descriptions of communing with Gamal to be anthropomorphic — an effort to ascribe human characteristics to a beloved animal.

“I don’t think people who would say that are listening enough to animals,” she said. “Just because animals don’t speak our language doesn’t mean they don’t have a language of their own. They do, as evidenced by their behaviors.”

Gamal’s jaw was badly broken when he was kicked during horseplay with a fellow member of a small herd on a Clinton, N.J. farm where he was boarding in August, 1989. He died shortly thereafter.

“Sometimes I drive down the road nearby, open the window, and say his name,” Branigan said, her voice breaking.

“I should have brought some tissues to this interview!”

Branigan had hoped to avoid writing about Gamal’s death in the book.

“I didn’t think I could survive writing about it,” she said. “The wisdom of my editor, Victoria Wilson, is what convinced me. She said, ‘You really have to write about it.’ When I said, ‘I can’t,’ she said, ‘Yes you can.’ ”

The book “was very important to me, because Gamal was an exceptional horse,” said Branigan. “I couldn’t live with [the fact] that when he died that was the end of him forever.

“How he changed me, how I changed him — when I died, that would be it [for him]. So the book was my way of ensuring him some sort of immortality.”

Which Horse Can Win a Wide-Open Del Mar Derby?

Fri Sep 3 , 2021
The $250,000, Grade 2 Del Mar Derby Presented by Caesars Sportsbook Saturday evening at Del Mar features the top four finishers in the Runhappy Oceanside Stakes on opening day of the meeting as well as the top three finishers in the Grade 3 La Jolla Handicap run four weeks ago. Another […] 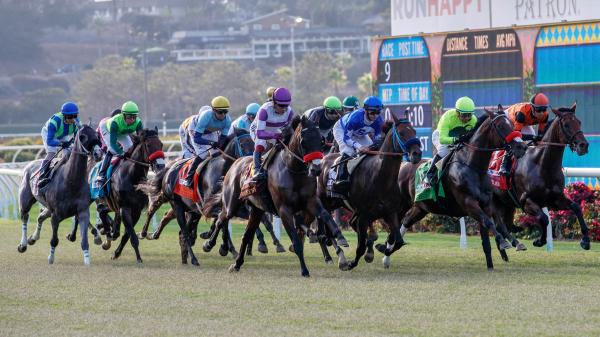